An Encounter with Shoshana Zuboff 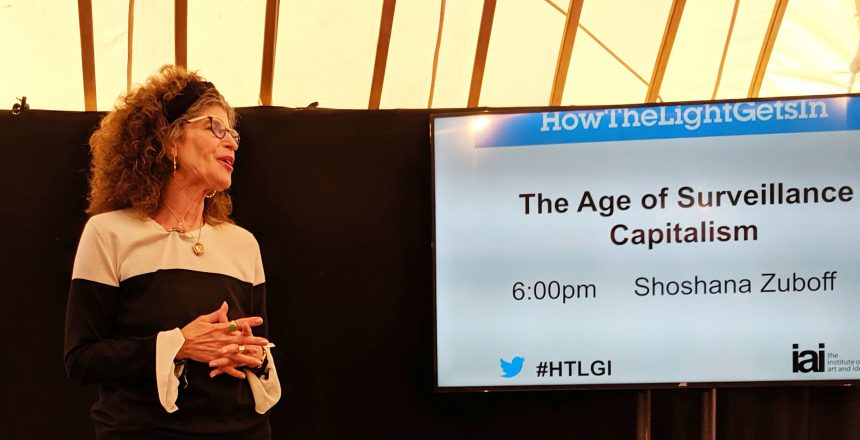 For months I have been trying to get to see Shoshana Zuboff speak. She is an American scholar and the author of The Age of Surveillance Capitalism: The Fight for the Future at the New Frontier of Power, a book that is attracting attention all over the world.

I kept coming across her planned appearances at various London locations too late after all the tickets had gone.

Finally, I spotted my chance. She was speaking at the How The Light Gets In Festival in September. While on holiday at a campsite in France I logged into the portal in such as state of over-excitement I mis-typed my credit card number three times and finally completed the transaction with an incorrectly spelled e-mail address. Luckily there was a process to right my error, and I was able to enter the site in London’s Hampstead bright and early on an unseasonably warm Autumn morning.

I first came across Zuboff a couple of years ago. While doing research on digital surveillance for a couple of assignments during my MA in Digital Media I discovered her article ‘Big other: surveillance capitalism and the prospects of an information civilization’.  On reading my essays, two different tutors put notes in the margin saying they would have liked to have heard more about Zuboff’s concept. The publication of her encyclopaedic book means you no longer need access to academic journals to learn about her thought-provoking ideas.

For me, a self-confessed dystopian fangirl (assuming you can still be one of those when you are over 50) getting to see Zuboff was a big deal. I met the investigative reporter Carole Cadwalladr this year at the Orwell Prize Ceremony  and have seen Margaret Atwood speak at London’s South Bank Centre. I’m rapidly filling up my bingo card of women who are prepared to tell stories about the worst that could happen – or is already happening – in order to make us all think about how we might the world a better place.

Across two slots in the Festival programme, Zuboff was able to explain her ideas in an accessible and engaging way. She opens with the same question to the audience wherever she goes, asking people to shout out what they are worried about. The same words come up all over the world. Privacy, transparency, manipulation – no surprises there.

She drew parallels using the observations of Harriet Martineau, the British social theorist who, Zuboff explained, had noted in 1833 that the aristocracy had one blanket term for people who were not like them – the lower classes. The tech giants have a similar category: ‘users’ are the twenty-first century global lower class.

In a short blog it’s impossible to do justice to a hardback that stretches to almost 700 pages, including 120 pages of references and notes.

Her definition of surveillance capitalism is ‘a global system of behaviour modification that threatens human nature in the twenty-first century just as industrial capitalism disfigured the natural world in the twentieth.’

The author traces a slippery slope from surveillance to prediction to control. Zuboff observes that the silicon valley companies harvest private experiences in the form of people’s behavioural data, feed it into artificial intelligence machines, and turn it into predictions about what we are likely do next. It’s a trillion dollar industry. From prediction, it’s hard to resist the temptation to experiment with coercion that users cannot detect. She uses the expression ‘epistemic inequality’, to describe the growing abyss between the massive amount tech giants know about us, and what little we know about them.

Trying my hardest not to appear weird, I hung around at the end and managed to grab a few seconds with Zuboff on the way out. Unlike one of the other charismatic speakers, who, the moment I had bought his book flicked his off-switch and became standoffish, Zuboff remained utterly delightful throughout out brief interaction. She graciously took the card I thrust into her hand outside the tent, and listened intently as I garbled on about how her ideas had influenced my book which she should look out for in January. As we parted, she smiled warmly and gave me a hug.

As dusk approached I made my way back across Hampstead Heath towards the railway station, passing 77 Parliament Hill where George Orwell once lived. I was not sure what he would have made of the Festival. He was no fan of Hampstead liberals nor vegetarians. But I was pretty sure he would have loved Shoshana Zuboff’s book.

Zuboff, S, ‘Big other: surveillance capitalism and the prospects of an information civilisation’ Information Technology (2015) 30: 75.

Zuboff, S, Surveillance Capitalism: The Fight for the Future at the New Frontier of Power (2019) Profile Books Ltd, London.

Photo:  Shoshana Zuboff speaking at How The Light Gets In, London UK, 21st September 2019
© Nicola Rossi