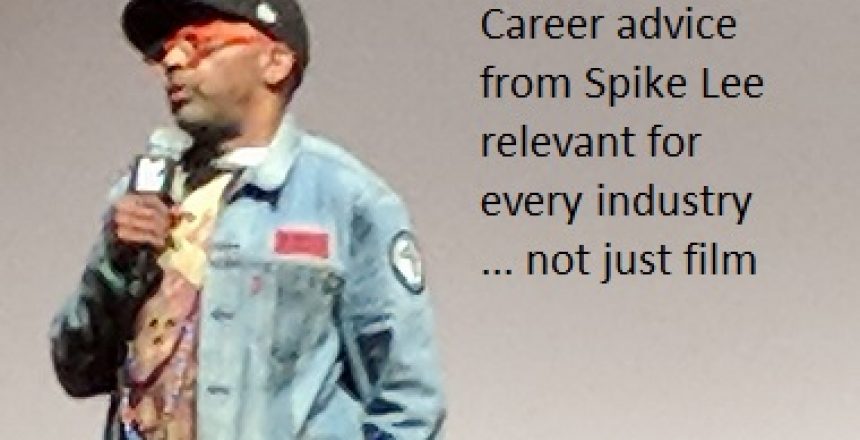 The interdisciplinary nature of the SXSW festival means that you get to learn things in surprising places. One of my favourite lessons from attending didn’t come from the ‘interactive’ festival, where there were lots of brilliant speakers, but from the film section.

When I saw the legendary director, Spike Lee, answer questions following a showing of the TV rework of his ground-breaking 80’s film She’s Gotta Have It, a number of people in the audience asked him for help as they were starting out on their careers. He was generous with his advice, and it was relevant to any industry.

It’s all about a love of hard work, and surrounding yourself with the right people.

“You’ve got to practise your craft,” Spike said, pointing out the phenomenal amount of time the greats such as Miles Davis, James Brown and Quincy Jones had spent in rehearsal. Eight hours a day, every day. The film director was also prompted to talk about his own pre-internet crowdfunding campaign. This had meant laboriously writing letters, by hand, to potential backers who eventually came through with the money.

At the world premiere of If I Leave Here Tomorrow: A Film About Lynryd Skynyrd, the same level of unswerving dedication from the artists was evident. Stephen Kijak’s documentary chronicles the band’s early days in Jacksonville, Florida, where they rehearsed for months in a boiling hot shack on the edge of a swamp. By the time they made it to the recording studio their performances were perfect from practising what they were passionate about again and again.

Suzanne Mitchell, who managed The Dallas Cowboys Cheerleaders (DCC) in the 70’s and 80’s, was on the same page. She was at the centre of a riveting documentary, Daughters of the Sexual Revolution: The Untold Story of the Dallas Cowboys Cheerleaders, which charts their emergence as a global phenomenon. A punishing rehearsal schedule underpinned their success, matched by a legendary rule book, and Suzanne overseeing it all as the enforcer queen with a heart of gold.

In all three of these examples, it is striking that the dedication people committed to achieving excellence in their field would have been impossible without the support of others. During his session – which turned into something of a career clinic – Spike asked one of the audience about whether his friends were helping him to get his film off the ground. When it became clear they weren’t interested, Spike gave the aspiring director an unambiguous instruction to start moving in different circles. “You need to change your friends,” he said.

Both Skynyrd and the Cheerleaders thrived by building an energetic team environment. Their determination to perform brilliantly, doing something they loved, was mutually reinforced by other members of the troupe, and further cemented by the leaders, supporters and advocates who wanted to them to do well.

That unwavering support – from colleagues, friends, family and bosses – is what helps all of us to keep going when times get tough. Knowing that someone has your back gives you the space to focus on the task in hand, maintain a high quality output, keep practising, and perform to the best of your ability whatever your chosen field.

Don’t just take my word for it. Schedule a break from the management textbooks and see these films. I haven’t been able to do them justice in such a short piece. They are all fun to watch, and you will learn something too.