London’s Summer of AI Part One: The Barbican 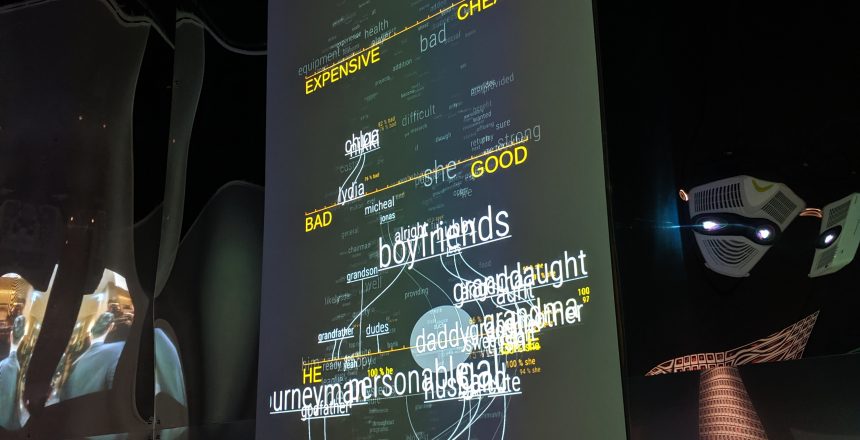 In London this summer, there are two exhibitions which anyone interested in the development of Artificial Intelligence should try to see. I’ve written short accounts of my visits to both of them help you decide whether to go along.

This first review looks at AI: More than Human at The Barbican Centre until 26 August 2019. The second will be about Stanley Kubrick: The Exhibition at The Design Museum, closing 15 September 2019.

When I went to The Barbican, admittedly on a busy Saturday, a number of slots had sold out, and we had to queue to get into the first gallery. I’d advise you to book in advance if you can.

The trail began with a look at stories about intelligence embedded in non-human forms, from the Golem of Prague to animism in East Asian culture.

I was transfixed by the display of film clips – from Frankenstein to Blade Runner, and other exhibits exploring how sentient robotic characters appear in comic books and related merchandise. The explanation of ‘uncanny’, drawing on Sigmund Freud’s 1922 essay Das Unheimliche, and including an Egyptian mask from his personal question, sat in the shadow of a loop from the original Blade Runner movie. It made its point well.

A scrollable timeline blended key dates and events from both science and popular culture, encompassing entries as diverse as Karel Čapek’s 1920 play, RUR, which introduced the term robot; the seminal 1956 Dartmouth workshop; the 1973 Lighthill Report which threw the UK’s AI research into slowdown; and the 2008 showcasing of Boston Dynamics Big Dog. No AI exhibtion would be complete without a space to consider the Singularity, defined in the exhibition as the moment when technology achieves a super-intelligence, and surpasses that of the humans.

My favourite interactive display was the moving wall (pictured) into which you could type a word, which then drifted down the screen moving between opposing values to demonstrate how the AI would categorise it. I put in ‘intelligent’. It scored 69% ‘he’ on the ‘he/she’ scale; and was close to 100% ‘human’ on the ‘human/machine’ scale. It demonstrated brilliantly the scale of the challenge people face when feeding machines with data on which to base decisions, and the need for us all to treat any answers that a purportedly intelligent machine produces with a critical eye.

There were numerous robots scattered around of course, including a creation by Hiroshi Ishiguro which sent my uncanny meter off the scale. I won’t be inviting one of them into my home anytime soon. Ywain, Japanese football robot, had a less threatening appearance and a clearer purpose.

Attempts were made to address the urgent ethical concerns which real world implementations of AI are raising daily. One plinth was devoted to Joy Buolamwini’s engaging and accessible work explaining algorithmic bias with regard to gender and skin colour.

I did not participate in the exhibit which said: ‘This installation will take photos of you, store them permanently, train an AI with them, and use them to create artworks’. For me, the simplistic statement left too many questions unanswered. Store my image where? What artworks? Train an AI to do what?

On leaving the first exhibition space, my friends and I were pretty exhausted. There was a lot to take in, crowded into quite a small and rather warm area, with so much ambient noise it was hard to hear the speech included in some of the installations. Still, the attempts to make it an interactive experience added a lot, from the chance to learn to play Go, the Chinese board game used as a litmus test for human versus AI intelligence, to participating in facial scanning (unless, like me, you didn’t fancy it).

The second room is an antidote to the noise. All four walls provide a relaxing, colourful surround, which respond to the positioning of the visitors. I could have stayed there all day.

Photo of exhibit demonstrating how terms are sorted by machines at the Barbican Centre, London UK © Nicola Rossi