Get your rollercoatster ride into the 2020s off to a provocative start with a free copy of For Those About to Rock, the prequel to Rockstar Ending. You’ll also hear about other VIP bonuses direct from the author. 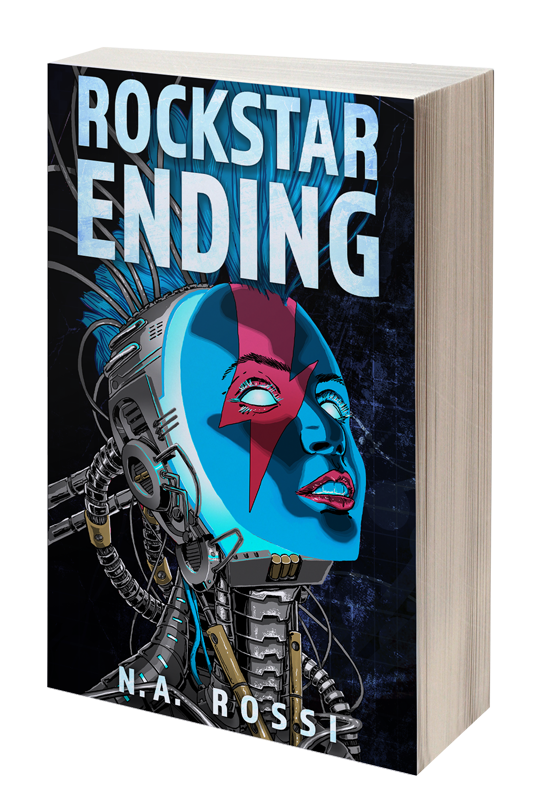 London. 2027. An ordinary woman discovers she is capable of extraordinary things. When Lexi finds out that older people are being coerced into genocide by stealth, she vows to take on the sinister corporation behind the ultimate Rockstar Ending.

It’s hard to resist their invitation to a pain-free suicide with a glamorous spin, a seductive soundtrack, and a killer inheritance tax exemption. After her best friend’s mother books a one-way ticket, Lexi sets out on a rescue mission that takes her deep into the heart of the death factory itself.

In a turbulent political landscape, the Yuthentic movement has opened a rift between the generations, promoting the redistribution of wealth to younger people by all possible means. Technology is weaponised to manipulate the victims, unseen, as social media, artificial intelligence and all manner of robots are deployed to undermine humanity.

But the underground resistance is getting stronger. How can an unconventional band of unlikely heroes stop the killing – before it’s all too late?

Rockstar Ending is the first novel in a terrifyingly plausible dystopian series that will get you thinking about the social and political issues that dominate the  decade.

The novels blend glimmers of dark humour with acutely observed cultural references and include a playlist of the songs that run through each story.

If you are a fan of speculative fiction such as Black Mirror, The Handmaid’s Tale or Nineteen Eighty-Four you’ll love this book.

Check out this short video for a glimpse into the launch party for Rockstar Ending at London’s Libreria bookshop in Janaury 2020.

Nicola read from the book and thanked her friends and family who had encouraged her to write it.

Leading members of the Orwell Society came along to support Nicola, including Richard Blair, George Orwell’s son, and Quentin and Liz Kopp.

Novelists Cathi Unsworth and Emma Flint, who Nicola first met as her tutors on an Arvon Foundation writing retreat, were also among the guests.

You can also hear N. A. Rossi read the first chapter of Rockstar Ending at SoundCloud.