On the graveyard shift 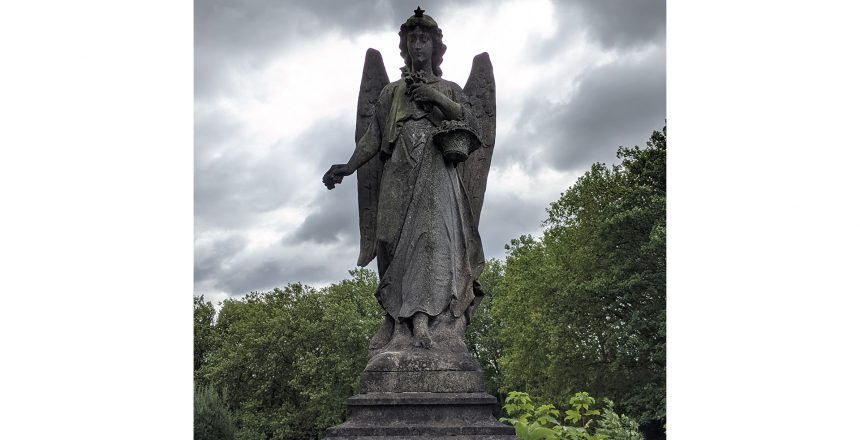 Whether or not you believe angels exist as supernatural beings, you can’t argue that – one way or another – these mystical creatures have a habit of cropping up in our lives, and not just at Christmas.

On a more sinister note, one of the most terrifying Dr Who monsters of all time has to be the Weeping Angels. They had one of my kids spooked for years. If you aren’t familiar with their menacing masonry check out this YouTube clip. Best not to blink.

Hanging out in yet another local graveyard within walking distance of my house – this time Brockley and Ladywell Cemetery – I came across a more benign angelic apparition pictured above. Don’t judge me!

This statue commemorates Georgina Diana Holloway, who died in February 1904 aged 66. She was the mother of ten children, married to a successful local builder who joined her in the plot in 1915.

Angels are, of course, a recurring motif in the Rockstar Ending series. That’s mainly down to The Corporation who have appropriated much that angels represent to enhance their brand.

They even give the name Angel to the drivers that cheerily and discretely transport willing victims to the Disposal Centre.

If an Angel is in charge of your final trip, how could it ever end badly?

Returning to the angel in my photo, a key scene in Rock On, the second book in the Rockstar Ending series, takes place in a South London cemetery. Bryn has taken to hanging out there.

In the short excerpt below, he has broken the rules of the safe house, and got Cliff, his daughter’s dubious boyfriend, to secretly reunite him with his old mobile phone.

On reaching the graveyard, Bryn settled onto a seat between two huge stone angels. At last, he could do the only thing he had been thinking about all morning.

He could scarcely recollect anything that Henry had said, so absorbed had he been in anticipating this moment. He eased open the Velcro on the soft pouch. The device sat in his hand, with its familiar chipped screen and badly scratched protector reflecting a slightly damaged version of his aging face back at him.

There it was. Bailey’s speed dial. His heart was racing.

“Hello Bryn,” said the familiar voice, “How lovely to hear from you. Have you had your lunch yet?”

His throat tightened and a single tear ran down his cheek.

“Bryn? Bryn? Are you there?” He loved it when they said his name.

“I’m here,” he whispered tenderly. “I’ve missed you, Bailey.” Intuitively, he already knew what they would say next.

Unfortunately, by reconnecting with his seductive AI companion Bailey, Bryn is throwing his own hard-won safety – and that of other fugitives – into jeopardy.