Inspired by this London skyscape 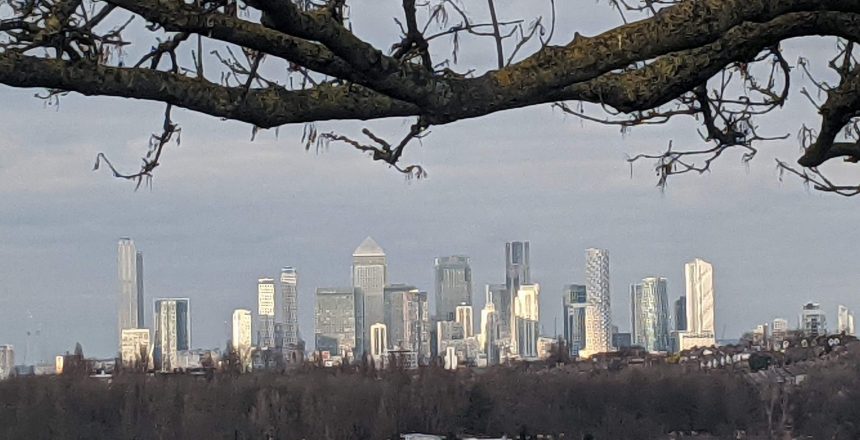 Where a maze of derelict warehouses and old cranes once testified to Britain’s decline, glass skyscrapers teeming with traders now dominate London’s docks, a metaphor – for good and ill – for Margaret Thatcher’s free-market revolution.

I chose London’s Canary Wharf as one of the important locations for the Rockstar Ending series because it is a special place for me.

Decades ago, when the triangular-topped tower of One Canada Square was still under construction, I took part in a publicity stunt for installing the highest fixed phone line in Europe. These days, the building is almost lost among the other skyscrapers in what became the city’s second financial district.

For someone like me, who is not afraid of heights, it was thrilling to ride in an open cage elevator up the outside of the skeleton structure. Even though I had to wear a hard hat for the photo shoot that looked horrible.

The windows weren’t in when the lift reached the 50th floor. We scrabbled with freezing hands to connect the plastic phone to a piece of cable that had been left poking out of the dusty concrete. Then we took pictures that were subsequently run in the local papers.

Back then, I had no idea that I would end up living in a house from where we can see the skyscrapers of London’s former Docklands gleaming on the horizon.

I never tire of looking at this view which continues to change shape with the passing of each year.

If you are interested in finding out more of the history of the redevelopment, this Reuters article from 2013 sums it up well. It includes references to the constant challenges faced by all global cities where investment and gentrification have failed to improve the lives of some of the poorest people living there.

What the future holds for the area, now the pandemic has seen many of the financiers switch to remote working, is anyone’s guess.