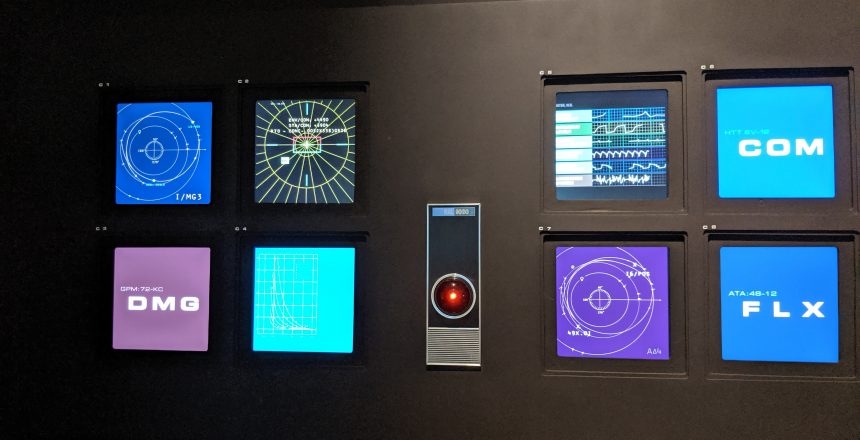 This is the second of two reviews looking at London exhibitions, on now, which provide food for thought to anyone interested in taking a sideways look at Artificial Intelligence (AI). They bridge the worlds of technology and creativity too.

Stepping into the entrance of Stanley Kubrick: The Exhibition, I was surrounded by the psychedelic sequence from the end of 2001: A Space Odyssey. Fragments of colour come hurtling towards you out of the darkness. As soon as I realised what was happening, it triggered the reflex to fumble with my phone in a futile attempt to recreate the experience later at home. Before I could get the screen lock off, the staggered screens promptly switched to quieter shots from inside the spaceship. It was so close that I felt I was in there with Dave, the astronaut whose story the movie follows.

That opening alone gets the exhibition 10 out of 10 for wow factor.

Naturally the film footage is an easy win, and a good preface for the behind-the-scenes explanations and exhibits encompassing the full range of his work. Artefacts are diverse, ranging from lenses and cameras to original costumes, and including props from many sets, such as the disturbing the manikins that decorated the Korova Milk Bar in A Clockwork Orange.

So what’s all this got to do with AI?

Kubrick had a long-standing interest in artificial intelligence, reflected not only in 2001 but also in the 20 years of groundwork he put to the development of the film AI: Artificial Intelligence which was completed by Stephen Spielberg after Kubrick’s death. The exhibition traces that story, including Kubrick’s frustration that early in the film’s development, special effects technology was not good enough to make the story convincing on screen.

Packed with items from 2001: A Space Odyssey, the final room includes a substantial exhibit of the HAL 9000 computer, the rogue AI that is the film’s antagonist. HAL’s all seeing red eye, and the control panel that monitored and disconnected the life support systems of the hibernating space crew, provide a unique backdrop for selfies, as well as an array of captivating 1960s computer graphics.

Items constructed in a simpler medium – Kubrick’s humble letters, written on a manual typewriter – give the most privileged inside track.

The development of HAL’s character unfolds in a treatment, typed, double-spaced onto heavy cream paper, with the subheading ‘1. ITS HUMANITY’. At the bottom is the giveaway note, in what looks like Kubrick’s spidery hand: ‘It can fake emotion and pain’. Anyone who hears the computer’s final words, as it fades out of existence, will witness the impact of that direction on the scene, and the movie overall.

Other letters provide analogue insights into his struggle to collaborate with the computer giant IBM, whose expertise he hoped would help him develop a realistic technological environment for the film. It didn’t go well. One note, dated July 29, 1965 was signed off ‘ANNOYED AND DEPRESSED BUT LOVINGLY S’.

He didn’t want ‘to waste more time on further discussions with them which turn out to be a total and abysmal waste of time’. Kubrick was feeling the acute pain of being ahead of his time. After all, it took IBM another 20 years to deliver Deep Blue, their chess playing computer that defeated world champion Garry Kasparov in 1996, which is now often described as having AI characteristics.

Kubrick’s frustration will provoke a wry smile from anyone who has had to persuade an organisation to leave its comfort zone, in pursuit of a new creative endeavour. However, the longstanding acclaim of the final film shows that, by pushing on through the low points, it is possible to bridge the worlds of the tech giant and the artist, and create something memorable that stands the test of time.

Stanley Kubrick: The Exhibition is on at the Design Museum, closing 15 September 2019. See also AI: More than Human on at the Barbican Centre until 26 August 2019.

Photo of the HAL9000 console at Stanley Kubrick: The Exhibtion, The Design Museum, London  © Nicola Rossi