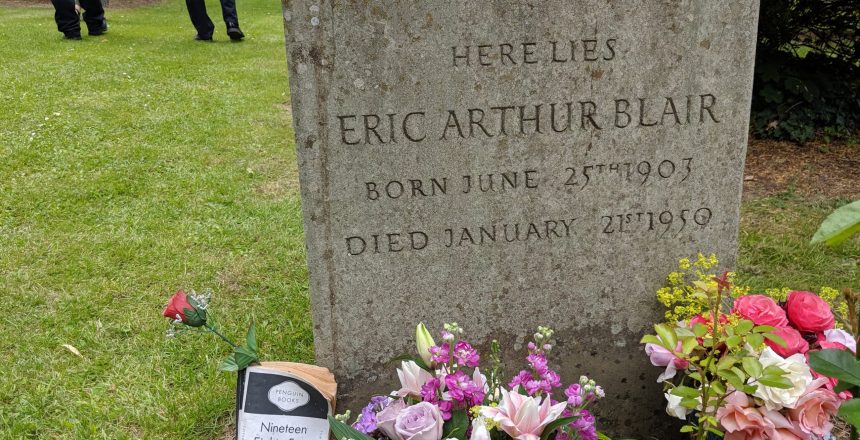 January 2020 marks seventy years since George Orwell – whose real name was Eric Arthur Blair – died. I took this picture last summer, at an annual tribute held in the village of Sutton Courtenay, Oxfordshie, England where he is buried.

We may be living in a different century, but his work remains alarmingly relevant.

I joined the Orwell Society after I won an award in their dystopian fiction competition, which inspired me to begin a new career as an author.

Dedicated to the understanding and appreciation of his life and work, the Society is open to all and organises some remarkable activities including this annual memorial. Every day their lively social media feeds, on Twitter and Facebook, provide a fascinating, fast-flowing stream of Orwell-related posts.

Richard Blair, George Orwell’s adopted son and patron of the Society, has been kind enough to contribute these words which appear at the front of Rockstar Ending:

I was introduced to Rockstar Ending when Nicola read an extract from the book at the Orwell Society Symposium in 2018.

We invited her to speak after she won an award in the Society’s dystopian fiction competition for her short story, One Last Gift. Nicola’s work is highly original, macabre and very funny.

I am delighted that she has developed her idea into a novel in the tradition of my father George Orwell, the author of Nineteen Eighty-Four, who wanted ‘to make political writing into an art’.

If you’re interested in finding out more about George Orwell, membership of the Society starts at only £10 per year.

Alternatively you can listen to some great programmes on the BBC, where Orwell worked on propaganda in 1943. These include documentaries Orwell in Five Words and Wigan Pier 70 Years On, and dramatisations of  Nineteen Eighty-Four, Coming Up For Air,  and Homage to Catalonia.