Rockaway revealed – out next month! 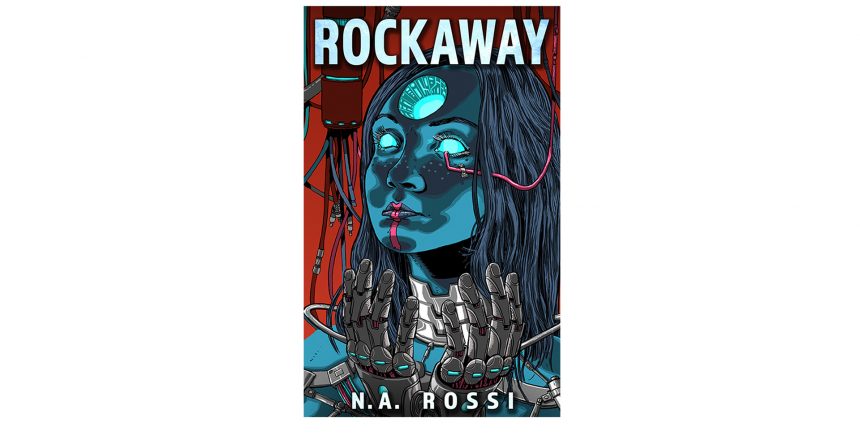 Sometimes I think I only wrote the Rockstar Ending series as an excuse to commission cover illustrations from Tim Doyle.

I had been a fan of his work for ages and was overjoyed when he agreed to work with me on the cover of my first book. That was more than two years ago.

Not long after we had that first design ready to go, I was approached by a mainstream publishing firm with an offer. It had taken them more than six months to respond to me.

I turned them down. After a lifetime of compromise, I wanted complete creative control in my new career as an author. They could not guarantee running with the art which Tim had already produced. Showstopper.

Tim and I have just completed our third project together, the cover for ROCKAWAY, the third book in the series.

It all begins with the creative brief.

Back in May, once I had written the first draft of Rockaway, I sent this note over to Tim:

‘It will come as no surprise to you that I’d like to keep running with the Bowie / technology theme… The illustration will have to work with the other two so we continue to build on the stunning visual impact of the books side by side.

‘In ROCKAWAY, a couple of characters are starting to struggle with their mental health as a result of their exposure to aspects of the Rockstar Ending programme. So I would like the Bowie-esque head to be hybridized in some way to suggest their humanity being corrupted by the technology.’

We had a phone call to bounce around some ideas. It has never been a problem that Tim is based almost five thousand miles (that’s eight thousand kilometres) from where I live and work in London.

The design went through a couple of stages.

After discounting an early idea that it might reflect the cover of the David Bowie album, Diamond Dogs, Tim came up with the concept we decided to run with.

The final stage is when the illustration goes over to my book designer, Glendon Haddix at Streetlight Graphics. I found him by asking other authors in Facebook groups for recommendations. He brings an abundance of typographical and publishing expertise to the party.

I’m hoping the cover of ROCKAWAY will  tempt you to look inside when it’s published on 8th January 2022.