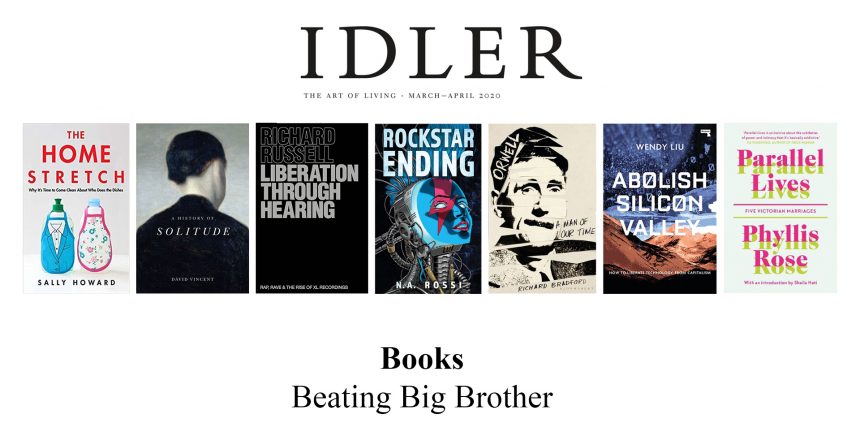 A review of Rockstar Ending appeared in The Idler magazine alongside several other titles that owe a cultural debt to George Orwell’s dystopian classic Nineteen Eighty-Four.

N A Rossi was inspired by both George Orwell and David Bowie in the writing of this speculative dystopian novel, which carries an introduction from the former’s son, Richard Blair, and a fantastic Tim Doyle cover image of a fembot with an Aladdin Sane flash across her face.

The concept seems eerily prescient: that by 2027, the volatile gulf that presently exists between a malcontented generation seemingly robbed of decent living standards by their never-had-it-so-good Baby Boomer grandparents will have developed into a state-sanctioned death industry, cloaked in the twinkling veneer of celebrity culture.

A cunning combination of technology – social media, artificial intelligence and all manner of bots – are deployed to manipulate the vulnerable old into buying into the titular concept, a glamorous package of pain-free suicide with a guilt-dissolving inheritance tax exemption for the next-of-kin. But as protagonist Lexi discovers when her best friend’s mother books her one-way ticket to the resurrection, this ain’t rock’n’roll – this is genocide.

Rossi’s dark, perceptive wit and the industry insights gleaned from her previous career in communications management make this gripping yarn an all-too persuasive vision of the future.

Ratings on Amazon are doing well, now up to fourteen five star scores with some great comments. Thank you if you have already written a review. It means a lot to me.

If you haven’t done one yet, another review on Amazon – or any other book platform you like to use – will help me to find more readers.