The signs of a real life dystopia 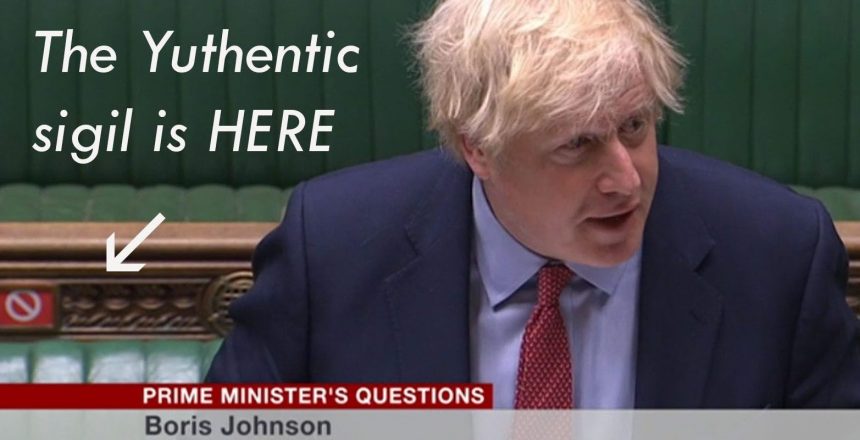 I could not believe my eyes when I saw the badge I chose for Yuthentic, the dystopian political party in my novel Rockstar Ending, on display in the House of Commons, right next to Boris Johnson, the UK Prime Minister.

This screen grab was taken during his weekly Prime Minister’s Questions session, but you can see hundreds more of the little slashed circles peppering the benches in any session on the live parliament channel.

It was tempting to claim I had secretly infiltrated the seat of national democracy to carry out a daring PR stunt for my novel. However, the truth is more prosaic.

Yuthies are, of course, in a fictitious political party, and the appearance of their sigil in Parliament is purely coincidental. I had re-purposed the old ‘no waiting’ sign on their behalf long before it was used it in the Commons chamber to designate seats to be left empty for social distancing.

At a talk promoting his book, Clear Bright Future; A Radical Defence of the Human Being, the journalist Paul Mason, first got me thinking about making the Yuthenitc sign into something with more significance. He touched on the the use of sigils by extreme political movements, some of which draw on mythology and the occult.

As well as including the symbol on traditional propaganda such as fly posters, I have a lot of fun creating accessories for my characters. The Yuthies have a range of merch – badges, T-shirts and jewellery with the symbol on display, sometimes alongside their hashtag #OurTurn.

It’s a tragic accident that I created a dystopian world where old people’s lives are undervalued just before the pandemic started presenting their demographic with a mortal threat. On a more serious note, if you are interested in the systemic failure to shield elderly people from the disease in UK care homes, it has been explored in a  BBC Newsnight investigation that is not for the faint-hearted.

It is sometimes difficult to avoid the impression that there is a sort of foreknowledge of the coming series of events.