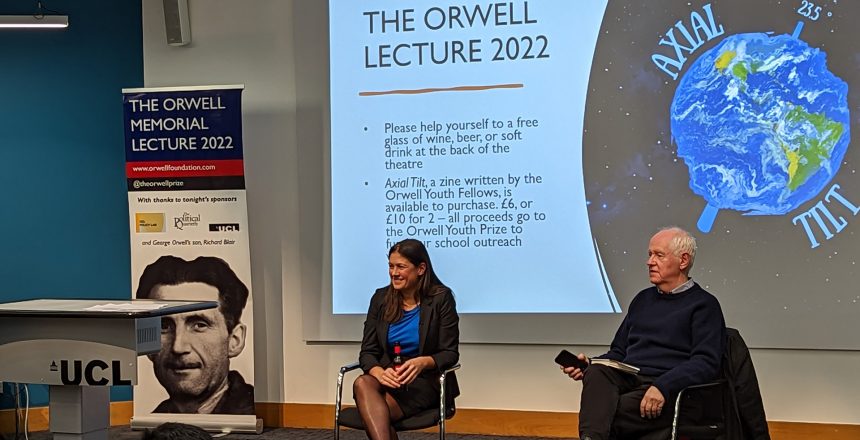 On Tuesday this week, I asked a question to Lisa Nandy MP, Shadow Secretary of State for Levelling Up, after she gave the annual Orwell Memorial Lecture.

The answer was music to my ears for reasons that might surprise you.

Her talk, hot on the heels of some major policy announcements by the Labour Party, explored the ideas in her new book, ‘All In: How We Build a Country That Works’.

“They’ll never allow it”, a comment made by one of her constituents, was a mantra for the evening.

It summed up the creeping nihilism that has pervaded many parts of Britain, provoking numerous voters into becoming anti-Brexit as a last-resort strike against Westminster-based paternalism.

Labour must be hoping that promising greater control over local communities will help them to win back those ‘red wall’ seats taken by the conservatives in the last general election. Nandy touched on this ambition by paraphrasing Orwell’s sentiments in The Lion and The Unicorn:

The country that lies beneath the surface must take charge of its own destiny.

My question, however, was more personal than political:

How – with so many commitments as a constituency MP and Shadow Minister – had she found the time to pull her ideas into a such a coherent argument?

I could not have hoped for a better answer:

As you might expect, Nandy spoke about Orwell’s non-fiction work, The Road to Wigan Pier, which described working class living conditions in the 1930s. She represents the people of Wigan in the UK Parliament.

That piece of powerful journalism shaped the political climate that led to an unprecedented national investment in housing. George Orwell pulled no punches about his deep skepticism of party politics. Fortunately, that did not stop those he criticized from taking radical action based on his reportage.

However, Orwell’s most famous, and most banned books are fictional:  Nineteen-Eighty Four and Animal Farm. Their anti-totalitarian subject matter is to this day a red flag (not THAT kind of red flag) to various repressive states. These stories remain pressingly relevant because their themes are timeless: Truth and power.

In a radio interview the award-winning writer Bernadine Evaristo said that fiction touches people at a very deep level.

It’s that emotional engagement that opponents of novelists’ ideas find most frightening. You can draw the same conclusion for playwrights, poets, musicians and artists. Maya Angelou, the American memoirist, poet and civil rights activist, put it far better than I can: